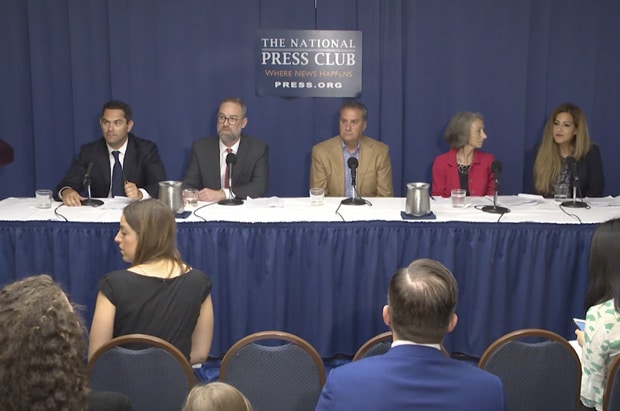 Posted at 18:28h in Uncategorized by philip korosec
0 Likes

—
A central Ohio family is suing a Cincinnati fertility clinic, hospital and lab, saying that DNA kits purchased as Christmas gifts revealed that a 24-year-old daughter is not biologically related to her father and may have been fathered by a hospital physician.

In the lawsuit expected to be filed Wednesday in Hamilton County Common Pleas Court, Jennifer and Joseph Cartellone, of Delaware, and their daughter Rebecca Cartellone, of Dublin, name the Institute for Reproductive Health, the Christ Hospital and Ovation Fertility Cincinnati.

Joseph Cartellone said at a news conference in Washington D.C., where his attorneys called for increased regulation of fertility clinics, that his daughter had thought the Ancestry.com DNA kits would be a wonderful, fun Christmas gift.

“It’s hard to explain the shock and agony when you find out that someone you love and care for — your own daughter — is not genetically related to you. My daughter Becca’s DNA does not contain any of my Italian family’s genetic history and makeup. There’s a mix of anger, pain and confusion that comes along with having to accept this and having to break the news to our family.”

He said his daughter feels guilt over the test kit gifts and confusion over her identity. She does not know her medical, family or genetic history; who her biological father is or her grandparents; or if she has brothers and sisters.

His wife is still in shock.

“She has to deal with the fact that this clinic … fertilized her eggs with a complete stranger’s sperm and placed them in her body,” Joseph Cartellone said. “She’s also faced with a difficult series of emotional challenges and questions. She’s profoundly disappointed that she can no longer give birth to a child with both of our genetics. And that’s exactly why we sought the help of doctors … in the first place.”

Lawyers at the Cleveland-arm of the Peiffer Wolf Carr and Kane law firm, who are filing the lawsuit, said paternity tests have confirmed that Mr. Cartellone is not the biological father of his daughter. The Cartellones, they said, used Ancestry.com results to narrow the identity of Rebecca’s biological father to five people, with one having been a Christ Hospital physician.

Because the number of children born to a sperm donor goes unreported, ”Becca could have hundreds of siblings out there,” said Naomi Cahn, a George Washington University Law School professor who has studied fertility industry regulation and spoke at the news conference.

The lawsuit alleges breach of contract, battery, negligence, negligent misrepresentation and charges related to breach of promise and failure in safekeeping the couple’s eggs and sperm. The family seeks financial damages and an order requiring the facilities to provide the identity of the donor who fathered Rebecca Cartellone and details about how the mishap occurred. It also questions whether Mr. Cartellone’s sperm was given to another clinic client.

The Christ Hospital Health Network said in a statement that the system is “evaluating the allegations surrounding events alleged to have occurred in the early 1990s” and that policy precludes public comment on pending litigation.

A message left at the Institute for Reproductive Health, which houses Ovation Fertility Cincinnati, was not returned.

Adam Wolf, a partner at Peiffer Wolf, said he receives calls daily from people reporting misconduct at fertility clinics. The $2.1 billion industry faces little regulation in the U.S. and is incapable of keeping its own house in order, he said.

Thousands of embryos and eggs are known to have been lost or destroyed in the past two years, he said, and his firm is part of litigation involving a number of errors.

“U.S. nail salons are subject to far tighter controls under state and federal law than fertility centers,” he said.

Wolf said the U.S. should look to the United Kingdom, where a national agency licenses, sets standards for and inspects fertility clinics.

Assisted reproductive technology, which includes the type of services used by the Cartellones, is among the “most highly regulated of all medical practices in the United States,” according to the American Society for Reproductive Medicine. The society says federal agencies regulate the industry, state medical boards license physicians and there is significant self-regulation, including a lab accreditation program, ethics and practice guidelines and monitoring.

In Ohio, the state Department of Health does not have regulatory authority over fertility clinics, but spokesman Russ Kennedy said in a statement that the department has made sure that the State Medical Board of Ohio, which licenses physicians, is aware of the lawsuit’s allegations. The department also is checking to see whether the federal Centers for Medicare and Medicaid Services want state investigators to conduct an investigation on its behalf regarding the Christ Hospital’s compliance with federal regulations.

Joseph Peiffer, a managing partner at Peiffer, sad the fertility center has refused to make amends.

“It’s refused to take responsibility. They have not even apologized to this family,” he said. “Unfortunately, the case we are filing here today is merely just one more illustration of an out of control unregulated industry. … We’re going to help to see that this doesn’t happen again, by bringing regulation to an industry that has none. Big fertility needs to be held accountable.”

In 1993, the Cartellone couple reached out to the Institute for Reproductive Health and Christ Hospital due to difficulties conceiving. They opted for in vitro fertilization, through which a woman’s egg is retrieved and fertilized by sperm outside the uterus before being placed back in the womb. The IVF was obtained through the hospital and performed by the institute, which was a hospital affiliate at the time, and the suit says a promise was made that Mr. Cartellone’s sperm would be used to create the couple’s embryos.

Cartellone said he is infuriated to learn that other families have suffered tragedy at the hands of fertility clinics and he, too, wants more regulation.

“These clinics need to be held accountable and they need to suffer real consequences for their action,” he said. “We’re willing to do whatever it takes to make sure that this doesn’t happen again to anyone else.”