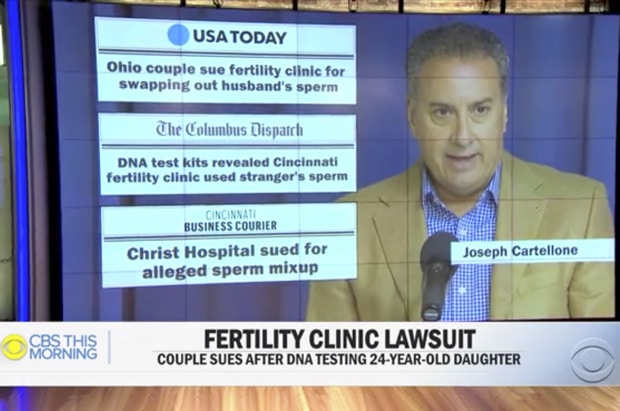 Posted at 15:47h in Uncategorized by philip korosec
0 Likes

Published by CBS NEWS THIS MORNING

A new lawsuit accuses an Ohio fertility clinic of a sperm mix-up with heartbreaking consequences. Joseph Cartellone says he recently found out he is not the biological father of his 24-year-old daughter after he and his wife used home DNA kits that she had given them for Christmas. The Cartellones said they have since narrowed the possible biological father to a handful of men, including one who worked at the hospital that helped conceive their daughter.

“It’s hard to explain the shock and agony when you find out that someone you love and care for – your own daughter – is not genetically related to you,” Cartellone said. “There’s a mix of anger, pain, and confusion that comes along with having to accept this and having to break the news to our family.”

According to a lawsuit filed on Wednesday, Cartellone and his wife underwent fertility treatment in 1994 with the help of three Cincinnati health organizations. They now allege those organizations were negligent and are seeking damages in addition to the identity of the donor.

With the help of DNA test results, the Cartellones believe they have traced their daughter’s biological father to roughly five people, one of whom worked at the Christ Hospital. He wants the fertility clinic and the doctors themselves to be held accountable.

In a statement to CBS News, the Christ Hospital Health Network said it’s “evaluating the allegations.” The American Society for Reproductive Medicine says assisted reproductive technology is among the “most highly regulated of all medical practices in the U.S.”

“If there’s maybe some good that can come out of this – that we can help potentially get some things changed so it doesn’t happen again – then that would certainly be helpful,” Cartellone said.

The Institute for Reproductive Health has not responded to our requests for comment. In addition to not knowing the identity of his daughter’s biological father, Cartellone says he doesn’t know what ultimately happened to his sperm and whether it may have been used to create embryos with another woman’s eggs.