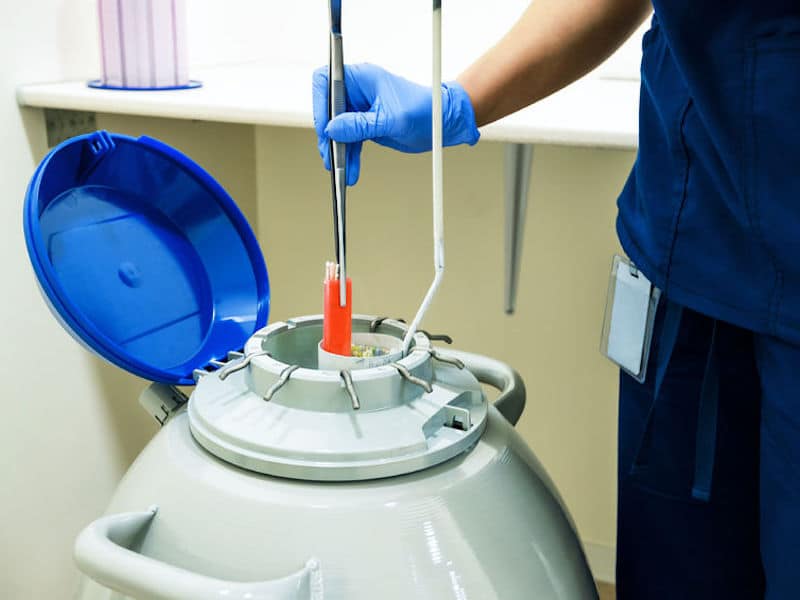 08 Feb A Cleveland fertility clinic that lost 4,000 eggs and embryos just got hit with 2 more lawsuits

Posted at 15:16h in Uncategorized by philip korosec
0 Likes

“(CNN) — Almost two years ago, a freezer malfunction at an Ohio fertility clinic may have destroyed hundreds of patients’ chances at having biological children.

Devastated families spoke out about their grief. Some created a memorial at a cemetery for the 4,000 eggs and embryos lost.
Now, two new lawsuits were filed Wednesday against University Hospitals Fertility Clinic in Cleveland, where the disaster happened.

The plaintiffs include a woman with no children who lost nine frozen eggs, and a couple who were hoping to grow their family but lost five embryos.

‘We want to make sure something like this never ever happens again,’ attorney Adam Wolf said.

Other cases against the clinic have been settled, but Wolf said he could not specify the number of cases nor the settlement amounts, citing confidentiality agreements.

University Hospitals has said it is ‘so sorry that our failures caused such a devastating loss.’ On Wednesday, UH Cleveland Medical Center had no additional comment.

The clinic said about 950 families were affected by the debacle in March 2018.

Now, as the two-year anniversary nears, so does the March 4 deadline to file a lawsuit, attorney Joseph Peiffer said. He estimates about 200 patients who could file a lawsuit have not yet done so.

‘Those who have not yet sought justice need to know this: There is still time to file your case against UH,’ Peiffer said Wednesday.

‘Everyone processes their pain and trauma from the UH egg-and-embryo destruction in different ways. Our clients filing today were devastated and needed considerable time to come to terms with their losses. Now, they are seeking justice. UH can’t give back what it destroyed, but the victims and the community deserve answers.’

One Saturday night, when the clinic wasn’t staffed, temperatures started to rise in the liquid nitrogen storage tank where more than 4,000 eggs and embryos were stored, University Hospitals said.

An investigation revealed the remote alarm system on the tank — designed to alert an employee when the temperature swings — was off.

‘We don’t know when the remote alarm was turned off, but it remained off through that weekend, so an alert wasn’t sent to our employee as the tank temperature began to rise on Saturday night, when the lab isn’t staffed,’ University Hospitals said in a letter to affected families.

The tank in question had been experiencing ‘difficulty’ for several weeks before the failure, the clinic said. There were problems with the automatic filling of liquid nitrogen into the tank, so employees were having to fill the tank manually.

The clinic said it had been working with the tank manufacturer on how to correct the problem.

It’s not the only fiasco involving eggs and embryos

Across the country, another clinic suffered an equipment failure the same weekend as the Cleveland disaster.

The Pacific Fertility Center in San Francisco said a piece of equipment in its cyro-storage laboratory ‘lost liquid nitrogen for a brief period of time’ on March 4, 2018.

‘We are truly sorry this happened and for the anxiety that this will surely cause,’ Pacific Fertility Center said at the time. The clinic said most of the eggs and embryos in the lab were not affected.

Having two incidents at nearly the same time is ‘a bizarre coincidence,’ said Dr. Brian Levine of CCRM, a national network of fertility centers that also freeze eggs and embryos.

‘What’s amazing is that it hasn’t happened before,’ said Dr. Richard Chetkowski, a San Francisco fertility specialist who has used the Pacific Fertility Center to freeze some of his clients’ embryos. ‘As far as I know, it’s the first time first time human embryos have been jeopardized by failure of the storage tanks. It’s a shock to see this risk for a stage of the process we thought was risk free.’

Even though there are no official regulations governing the freezing of embryos, Levine says the gold standard for clinics is to arm every tank with independent sensors and probes that send audible warnings, such as a beep, as well as text and email alerts to a wide group of recipients 24/7 if something goes wrong.

‘Sensors have to be checked,’ Levine said. ‘We do it daily, with another set of different checks once a week. Alarms have battery backups and all are on landlines, not cell phones. We have enough liquid nitrogen to last weeks. It’s expensive, but worth it to make sure we are prepared.’

But the most troubling part of the fertility industry is that it “operates largely unregulated,” Peiffer said.

‘In many states, your average nail salon is more regulated than a fertility clinic,’ the attorney said. ‘There’s no required reporting if a clinic loses someone’s embryo. That’s not right, and that has to change.'”